QlikTip #35: Some hints on working with the QlikView Designer (Part 2 – Moving/Copying Objects)

This is the second part of the series of articles summarizing some hints for working with the QlikView Designer. In this part I’ll show you what you need to know about “Moving/Copying objects” in QlikView.

This topics sound so easy and probably it is, but just for a complete series on working with the QlikView Designer I have to include this …

First of all you can move single object by using your mouse:

Just click on the title bar of an objects and drag the object to the desired position:

Moving objects by using the mouse

If you hold the Ctrl key the object will be copied:

Copying/Moving an object can not only be done within a sheet but also to other sheets: Just drop the object onto the desired tab:

Moving or copying an object onto another sheet

If you want to use only the keyboard you can use the following shortcuts:

Using the shortcuts is also possible if the object is locked!

If you want to prevent that object can be moved/copied/sized you can lock an object by setting the following properties in the object’s properties: 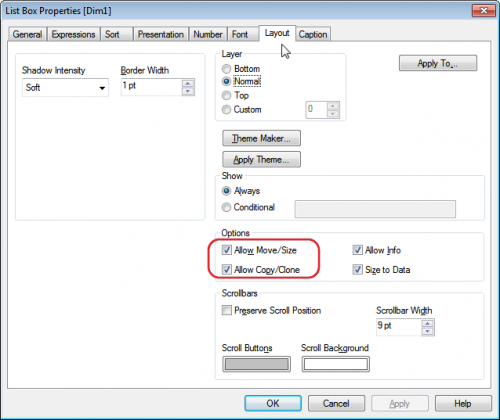 If you want to move/copy an object although it is locked, just press the Alt key. While pressing the Alt key the locking-restriction will be temporarily suspended.

Published: May 2, 2011
and tagged Shortcuts, design-grid, design-mode, lock. Bookmark the permalink. Both comments and trackbacks are currently closed.