By Stefan Walther Comments closed
This entry was posted in Design & Layout, Extensions

Some weeks ago the chart type “Slope Graph”, invented by Eward Tufte in 1983, was first brought to my attention.

When I first saw it I thought that it would be quite easy to bring this chart also to the QlikView world. But after some research I realized that Slopegrahps have some drawbacks which are quite tricky to solve.

I have found quite a dozen of nice implementations out there but none of them was really satisfying me. So this little project was a perfect playground for me to understand challenges when creating chart-visualizations better. It really was the first project where I did not only adapt existing visualizations based on D3 to be used in QlikView, instead I created a new implementation of Slopegraphs in D3 (by combining several existing approaches).

Here is the result: 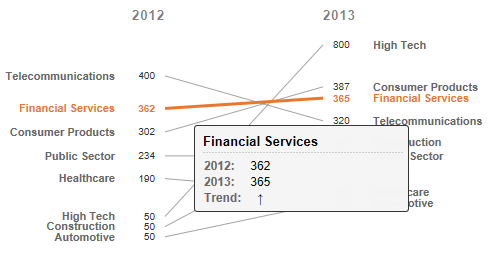 Edward Tufte states: “Slopegraphs compare changes over time for a list of nouns located on an ordinal or interval scale” and he also first published and example in his book “The Visual Display of Quantitative Information” in 1983:

Advantages and Scenarios for Using SlopeGraph

The most important and relevant drawback of using Slopegraphs is that if you have a lot of dimensions with similar values the visualization becomes messy very quickly (see some screenshots below demonstrating this).

To overcome the above described drawback I have chosen a combination of several approaches based on the default visualization: 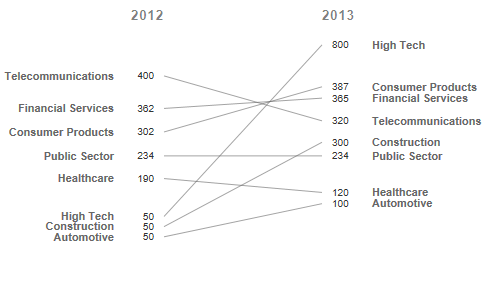 Handling Conflicting Label
In the above displayed example you’ll see that three dimensions on the left side share the same value for 2012. Instead of displaying them upon each other the dimensions are shown one below the other.

Emphasizing Dimensions
If you hover a dimension, the current dimension will be emphasized / highlighted 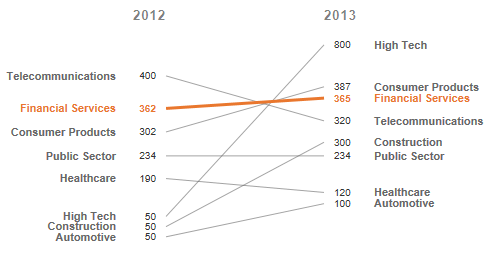 Displaying a Summary
While hovering a dimension a tooltip will be displayed with a short summary. This is especially useful if you have a lot of dimensions with little movement from one to the other time period:

Text Fadout for Colliding Labels
But there is still the issue that if you have a lot of dimensions with similar values that they will collide: 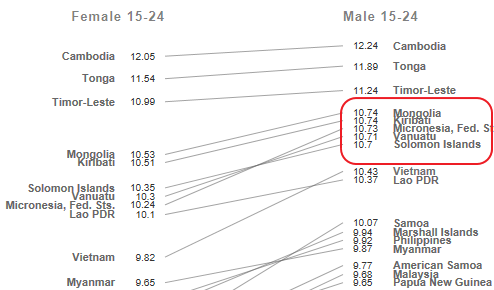 There are many suggestions how this can be solved, I have chosen an interactive one where conflicting labels will be faded out if you hover a dimension: 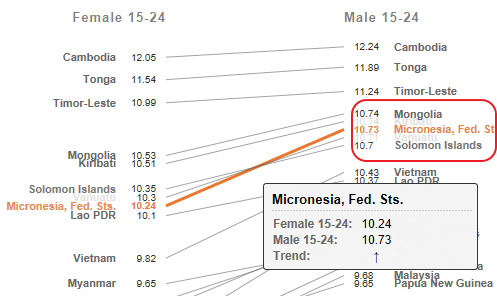 Still to Many Dimensions & Messy Visualization
There are situation where all the above described solutions are not sufficient. Especially if you are using a lot of dimensions this can happen. 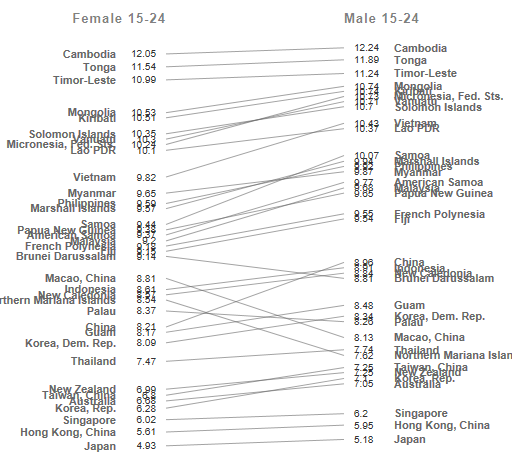 Messy result because of conflicting labels

There are two possible solutions: 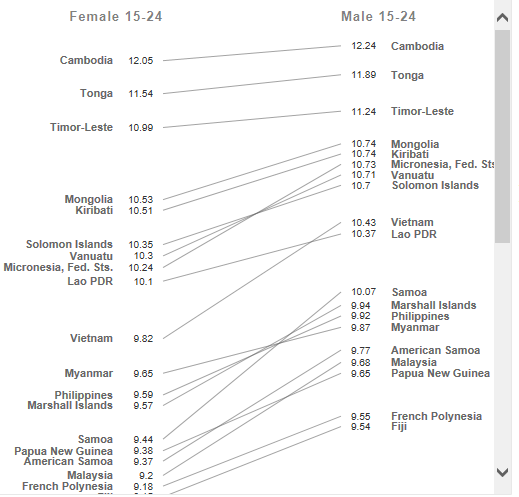 Caution for Touch-Devices
It is at this point important to mention that the approaches I have chosen are not really a perfect fit for mobile devices (especially if you think of touching devices which at the same time excludes hovering items …). I’ll have to investigate on this …

In my opinion it is really worth giving this type of chart a try (and I would not be surprised if we’ll see Slopegraphs much more often in the future). But this type of chart is also not a “generalist”, usage and configuration has to be considered with caution.

The solution called “D3SlopeGraph QlikView Extension” is published under MIT-license and free to use (but still, I am happy to hear your feedback!!!)

If you have any issues please post them here.

Additional Articles on the Web